Stupid idea from a long tradition of stupid ideas...


History is littered with stupid ideas and mistakes.

One would imagine that they are so common place that mistakes don't really appear on anyone's radar unless said mistakes take the form of breath taking stupidity such as invading Russia or if they result in the mistake being filmed and making its way onto Youtube or a ghastly prime-time TV show on a Saturday night.

Your humble narrator to all intents and purposes has a degree in mistakes as he can seemingly only learn by getting his fingers burnt.

As such, the following proposal portends to be proper little pearl of wisdom for your humble narrator, who, in his defence "is only trying to help".

Now, not being in the same league as the champion of Ulster-Scots, Dr Billy McWilliams, your narrator does not harbour any ambition to leapfrog his noble intentions or pragmatic judgement on the matter of the 'fleg' at Belfast City hall rather he would propose a pale shadow of a suggestion in the company of such inestimable intellectual might:
http://1690andallthat.blogspot.com.au/2013/07/fleg-crisis-solved.html

Rather, your beleaguered narrator had the misfortune to apply his unimpressive mental faculties to the matter of Belfast's embattled city hall (a building most admired by himself).

To break the argument down to it's very base elements:

Republicans, from a perspective hitherto unfamiliar to your narrator want 'their' flag flying as a symbol of equality.

As of very recently (namely until 1600hr Saturday 24th August as your narrator was on a mission to purchase some wine) this equality argument was given no merit within the quarters of AG.

However, he now understands that feelings are feelings and that, quite simply, is that. So, if a large percentage of the population of Belfast feel beholden to salute a flag not to your narrator's taste then so be it, that is how they feel and no amount of pleading nor reasoning shall determine otherwise.

Which brings us all to the oft forgotten 3rd group; The middle ground.

This middle ground are both brave and foolish for the same reason; they take potential hits from two lanes of traffic much to the frustration of Mr Miyagi, who quite clearly stipulated that it was a bad idea to walk in the middle of the road. "Walk left side of road, safe/ Walk right side of road safe/ Walk middle, sooner or later get squish like grape"

This middle ground of Northern Ireland would like a flag for Northern Ireland. They might have a preference of a Union Flag over a Tricolour or vise-versa but that is not to say that their comfort with either flag should be interpreted as a preference to a Northern Ireland flag or that they harbour the sentiments expressed by those whom embrace the extremes of either (fleg) pole (har!).

But a choice they don't have.

It's either a Union Flag which by the day is being trailed into the redoubt of 'Britishness' (thank you Protestant Coalition), the Tricolour (which is 'Irish' at it's lightest extreme but perceived as 'Provo' at the other) or the Ulster Flag which sits firmly within the Loyalist camp. 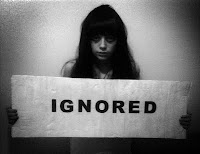 As such, the middle ground is ignored. As usual.

With regards to the 'fleg' crisis, your permanently baffled narrator proposes a plan that should satisfy the points mentioned earlier regarding the alleged 'demands' of each side. However, as we shall soon discover, these demands will upon deliverance multiply if not mutate rather quickly to the point where the original demands are unrecognisable and obsolete.

A recap on the demands of earlier and their subsequent satisfaction, reads thusly:

A Union Flag: This satisfies the demand for the UK flag to be flown 365 on a British municipal building.

A Tricolour: This satisfies the Republican demand for equality.

Observe now reader, how the goal posts change, no longer is J Bloggs Unionst MLA satisfied with his flag of choice flying as he demanded, rather now he sees his own loss in the gain of 'themuns' should the Union Flag be raised in tandem with the Tricolour, ergo, back to square one.

So, enter the third flag, a new Northern Ireland flag yet to be concocted.

This flag would cover the massive grey area of those who regard themselves as 'Northern Irish' and either British or/and Irish.

They would be represented on the whole by two flags and, given that they have twice as much flak to cop from either extremity of the political spectrum it is rather fair.

So, a Union Flag for those who are solely British/partially British/sometimes British. A Tricolour for those whose allegiance is more Republic orientated and the newly formed Northern Ireland Flag for the deviants/confused sorts/Lundys/miscellaneous types stuck in the middle. 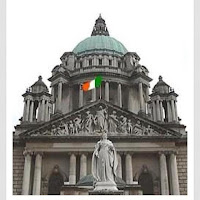 So far so good?

This is where the principles of each tribe are abandoned and exchanged for a petty currency measured in annoyance at the other tribe's expense.

From the Unionist camp, rather than seeing gratification that their flag is rightfully restored to it's place over the centre of one of Britain's most important industrial cities, they would see insult at the achievement of the Tricolour's ascent over the copper dome not to mentioned anger at the face-lift bequeathed to the Ulster Flag, the flag of Northern Ireland in their eyes (and only their eyes). 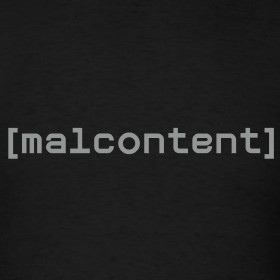 From the Republican camp parked on a similar latitude defeat would be salvaged from a small victory. Rather than seeing an equality (1/3rd to match the two other schools of thought) they would lob the sheer existence of Northern Ireland into the Unionist camp and would summarise the situation thusly: "themuns have TWO flags so they do! We have only one!!!"

Hence, an abandonment of the underlying principles for either camp's original objective brings it all to a point where victories and successes are measured not by how much one obtains but by how much 'the other side' loses.

Northern Ireland is increasingly becoming a frontier with three fronts, not two.

It is about time the people of 'Northern Ireland' have a say instead of just those who would deem themselves purely as people of the UK or the Republic.

Let us fly three flags from city hall to represent the wide range of opinions and wavering allegiances rather than the grinding, miserable zero-sum game that our politicians and trouble makers hold dear.