Once Upon a Time in the West of the Bann (When Catholics Played Lambegs...)

Once upon a time, long ago, way before Presbyterians invented Irish Republicanism (sort of), the places that we know as Ireland and Scotland (or rather most of it) shared the same name in the eyes and mouths of the travelers from the civilised Mediterranean; ‘Scotia’, meaning land of the Gaels.

From a sea faring point of view it’s an archipelago with varying distances between hundreds of islands, the two main islands being separated only by 20km  but straddled in part by an identical culture (well, as far as Gaelic Scotland was concerned).

Hence, the world was gifted with Scotia Major (Ireland) and Scotia Minor (Scotland).

However, back in the days of ‘the’ Scotia, it was the norm that it was generally a ‘langwage thang’. And the Gaels (‘Scotians’?) spoke the same language.

That’s not to say that both lands were necessarily seen as ‘one’ by the inhabitants, for example, Brian Boru had himself titled ‘Imperator Scottorum’ – ‘The Emperor of the Gaels (Irish)’.

He would then wonder at the need for the constant battle lines that are being drawn in the identity stakes.
The ‘Irish’ (as in the main group) are happy being Irish and they like the Scots. The Scots are very happy being Scottish and in general get on well with the Irish (especially if the Scots are of the West Coast variety). The Northern Irish Protestants (being stripped of their Anglo-Irish brethren since partition) have seemingly switched from being Irish with an obvious Scottish influence to being Scottish people marooned on the wrong side of the Corryvrecken.
This would cause a lot of bafflement to said medieval merchant.

One would have to agree with the hapless and no doubt confused merchant.

Why so much effort into stressing the ethnic differences when said differences go full circle historically speaking and end up in Ireland anyway?
Were the Northern Irish Protestants planted on Erin’s shores from Nigeria then there would be a great deal of logic in the approach.


They came from a place planted by Gaels, joined later on by the very same groups who imposed themselves on Ireland; Vikings and Anglo-Normans.

So it’s not like they’re the fruit of some exotic hybrid tree.

For a long time the main differences were religion and to a lesser extent political loyalties and the pronunciation of the letter ‘H’.
Now the churches are haemorrhaging members.
The spectre of ‘Rome Rule’ is clumsily grasped by those who have gladly surrendered their mental faculties and those who wish to exploit this surrender and use it as means to induce fear and create political myths and bogeymen.


The past decade or so hasn't been great for the Catholic Church. Nineteenth century Presbyterian proselytisers would have lept on that wounded animal like a pack of hyenas.
Not so their modern counterparts.
If ever there was a time for a fresh stab at a ‘Celtic Church’, one that would use Gaelic as the language of the house (like the Free Presbyterians of the Outer Hebrides) and pay homage to the Celtic saints like, Brendan, Columba, Brigid, Kevin, Patrick & Co, it would be now.

With the fall of ‘Rome Rule’ and Protestant church attendance the cultures have even more in common  now given the machinations of modern life: Soap operas, fast food, supermarkets, commuting, benefits, tabloids, mobile phones, cheap alcohol, praying to the hand of the lottery for deliverance, a hankering to own anything by Steve fucking Jobs etc etc.

Yet the idea of massive differences prevails.

So much so that there are whispers of a ‘cultural war’.

There is no denying that there is a short sighted strategy to wipe away all evidence of British trappings, unconvincingly labeling it as a ‘foreign’ influence.

Such is the logic and initial tragic path for nationalism.

For all the bravado of nationalism there is an inherent insecurity lurking in the background.

Take former European colonies and the difference in post-colonial attitudes.
African countries couldn’t wait to tear down the monuments of their former masters whilst the Indians preserved many of the pompous British Imperial edifices in a very indifferent non-plused manner in the off chance Jonny Englander might come for a photo, much to the envy of the rest of the Daily Mail readership.        (Although that's not to say your humble narrator blames the Africans for such actions, we're all human after all and people like King Leopold of Belgium didn't do much to raise Europeans to the moral high ground)
In Central and Eastern Europe many cities now strive to show off ‘their’ architecture, buildings imposed on them by ‘oppressive’ empires: Krakov, Prague, Zagreb, Ljubljana, L’vov, Chernivtsi, Brasov and many more beside. Each town is proud of its architectural portfolio and the Hapsburgs be damned if they’re getting the credit or the resentment.

Dublin had this phase too, some citizens there were glad to see the ‘British’ houses of Georgian Dublin go under the wrecker’s hammer but now Georgian Dublin (at least as far as one can discern from tourist literature) IS Dublin. (Your humble narrator worked in a Dublin hotel that once served as a bank back in the Georgian hey-day).

Now the chip on the collective shoulder has been replaced by pragmatism. The Georgian and Victorian buildings of Dublin are now a source of pride and perhaps though British by inception were built by Irish hands.

These same Irish hands lifted pints in the splendid Georgian and Victorian watering holes of Dublin and penned words for the world to admire in their adopted language.


The people of Dublin are all the better for this acceptance of their ‘foreign’ influences, whether it be their buildings, their common tongue or the very foundation of Dublin itself (a Viking trading post, colony and slave port).

The same can’t be said for the Northern Protestants who have went from being foreigners, quasi foreigners (as in Protestant Gaels), to full blown Irish, to Ulster nationalists (still Irish) to now simply British. 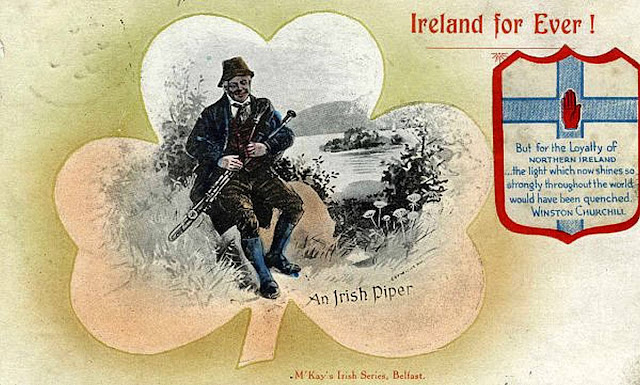 They are not only Irish, they were as instrumental to Irish culture and its recognisable symbols as the ancient Irish were to Scotland (for example, the word ‘craic’ (originally spelled as 'crack') and musical reels are both Scottish imports).

Yet many would violently deny their Irishness on account of the perception of what Irishness ‘is’ i.e. in the eyes of many Protestants it is that brand of Irishness championed by Sinn Fein who are not yet even at the African-esque post-colonial stage of nationalism.

This to many Protestants and Unionists is highly unappealing and forces them to retreat into a cultural cul-de-sac of the Irish terrain: Ulster Scots (or ‘Scots Irish’ as the original term would have it, but in their eyes the word Irish has been sullied by Adams & Co).

So now we have Scots (Irish) opposed to Irishness in the original ‘Scot’land (Ireland) and heaven forbid that foreigners would confuse these Celtic (“K-eltic”) English speakers with other Celtic English speakers of a very similar back ground.

Your humble narrator, who cherishes his Scottish ancestry to such an extent that he got married in a kilt (and persuaded attending Slavs to dress similarly) regrets that there is such an artificial cultural wedge driven between Erin and Alba that the two countries are culturally speaking being pushed so far apart by the very people who should act as a cultural bridge.


To have an Ireland (at least in the North) where kilts, pipes, Gaelic, lambegs, folk dances, music, hurley sticks and marches are part and parcel of EVERYONE’S identity would be a strong Ireland indeed. The Northerners would stick out very much as Northerners; different from the South and different from the Scots yet comprised of the best parts of both lands.

To push the sci-fi fantasy of earlier even further and propose the impossible scenario that once again the language of the mainly Presbyterian Scottish Outer Hebrides should become the dominant language of the two lands (the language that was the tongue of Dalriada, the ancient kingdom much lauded by the modern Ulster Scots) then where exactly would the differences in the cultures lie?

Part of the reason for the perceived submersion of Ulster Scots culture is quite simply that is was in a manner of speaking the backbone of Irish culture of the North.
Only when the culture ‘stasi’ of the south started to tinker with the idea of what Irish culture should be did the difference start to take root for Northern Ireland’s isolated Catholic population looked to the south for cultural guidance, not to their Northern Protestant compatriots (who didn’t want them there in the first place).
Hence, no more Catholic lambeg drummers(?)

So now Ulster Scots is making a recovery but this time it’s showing some of ‘puritanism’ and contrived nationalism as their opposite numbers down south did when trying to refashion ‘culture’.

The Irish nationalists wanted rid of ‘foreign’ influences, the Ulster-Scots nationalists want to retain pretty much only foreign influences and the rich’ culture that should have been’ has been still-born at best, murdered at worst.

The irony of being more Scottish than Scottish so as not to be Irish is not lost on your wretched narrator who so dearly wishes to see the northern land retain its natural stance in the order of things:
the cultural bridge between Ireland and Scotland, not a series of contrived cultural fault lines.