The Impending Doom of Belfast

A bit of a melodramatic title but now I have your attention.

For once this isn't about flags or having a go at Sinn Fein or the Orange Institution rather it is something that affects both communities; namely the proposed 'regeneration' of the northern part of Belfast's city centre and in particular the plight of The Sunflower bar.

Now, before we go into detail let us discuss the two extremes of regeneration:

1/ The hard-core conservationist approach - The extreme end of this would involve all and more of the following actions; a complete moratorium on the erection of tall buildings, a ban on knocking down pre-war buildings, forcing new buildings to adopt a pre-war architectural style, lobbying the government to seize neglected buildings so that they might be preserved, a ban on 'land-banking', compulsory purchases of Belfast's many car parks & derelict buildings and the importing & re-erection of pre-war buildings that have been demolished in other Victorian industrial cities such as Liverpool and Manchester.

2/ The hard-core merciless developer approach - Draw a red line on the map and demolish everything that lies within that red line regardless the publics feelings or affections for said area.


Now, both those scenarios are pretty extreme aren't they?

A rational person would think of a pragmatic arrangement the would fall somewhere between the two poles wouldn't he/she?

Well, from what we can glean so far option #2 is very much on the cards.

Yes, the crazy "no one would be that heartless?!" option is very much what is on offer (seemingly, the plans are conveniently vague when viewed in person at the planning office, 4 - 10 Linenhall St, Belfast).

That's right, the plans are seemingly about taking a wrecking ball to an area that has many interesting old buildings and a great deal of potential should a sympathetic plan be devised (remember what the Cathedral Quarter looked like in the early 90's?).

Now, the area does need some TLC.

The Ulster University needs somewhere to house its students after the re-location to the city centre.

I'm not trying to hold back progress or change. What I am suggesting is that the existing buildings and architectural fabric of the area should be absorbed and incorporated into any new proposals.

And before you start shouting "that's impossible! Those buildings are wrecked ye eejit ye!" please consider that areas such as Temple Bar, the Cathedral Quarter, Glasgow's Merchant City, Melbourne's Fitzroy and various parts of Manhatten were in not too  dissimilar states of disrepair and neglect not SOO long ago.

And now all of the above are rather desirable areas (all right, maybe not Temple Bar, it's too mad for me at the weekend, but, it brings in the tourists and the bucks) courtesy of small businesses and sympathetic regeneration plans.

Looking at Glasgow's Merchant City in particular, in the late 90's entire blocks were held together with scaffolding, they kept the facades of the old warehouses and wot-not (and the GPO) and built new buildings inside, despite the protests and hissy fits from developers who said it couldn't be done (READ: "That'll eat into our profits...").


So, it quite clearly CAN be done. The only problem is that it eats into the profits of a developer.

So, at present, the plan is for developers to have the profits from this 'regeneration' proposal and for Belfast to pay the price in terms of lost heritage.

Not to mention lost potential of long-term employment and tourism.

If that area was done up to a decent and sympathetic standard then it might be enough to persuade tourists to hang around for another night or two. It could be the decider for people who are thinking of a weekend break (Liverpool and Glasgow have put a lot of effort into regeneration and restoration, the two cities most like Belfast in terms of people, culture and history are now pulling out in front in terms of competition for tourists).

"NO ONE CARES ABOUT STUPID OUL' BUILDINGS!"

Well, if that is the case then Belfast city council conceals these feelings superbly. Look at the pictures below from Belfast promotional posters (this one is in the Shaftesbury Sq area), they're of some of Belfast's key attributes and most appealing parts: 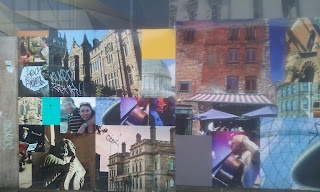 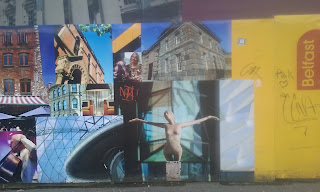 And these tourist info boards on Gt Victoria St fail to mention the flats, apartments and office blocks in the area. 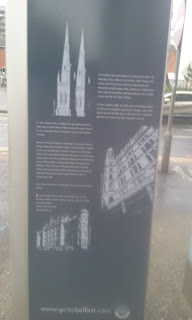 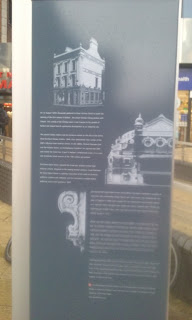 Now, how many of these marketable assets were new buildings? Not many, apart from the Victoria Square building (which is rather schmick in my book).

So, on one hand were being told how wonderful Belfast is with it's wealth of architecture and at the same time the latest proposals are to BULLDOZE the exact same architectural tapestry in an effort to make the city more marketable and appealing.

How does that make any sense? At all?

Aside from the Titanic Quarter and Victoria Square the attractions are all rather old.

You'll notice that new apartment blocks do not feature as key attractions...

So, now that we have the crazy plans for all to see and the clear merits of regenerating an area in a sympathetic fashion what can we do?

Well, quite a bit actually.


Firstly and most importantly you can object online. The planning office simply need to be made aware of public discontent. It's easy to do.


Follow the links below, register, and add a comment (and tick the 'object' box). It is widely regarded that an economic based argument e.g. tourism would be more effective than an emotional based argument.

The planning portal can be accessed here: http://epicpublic.planningni.gov.uk/publicaccess/

If you follow this link you can search for applications across NI by address/key word or reference number. The ref for Northside is: LA04/2015/0577/O

You can go directly to the application here:
http://epicpublic.planningni.gov.uk/publicaccess/applicationDetails.do?activeTab=summary&keyVal=NR2M3ISV30000

The key thing is to send your comments to: planning@belfastcity.gov.uk with the reference number, address and proposal clearly stated at the top/on the title. Ask for a notice of receipt to make sure your comment is logged with planning. "

The Sunflower has its own campaign (and it includes amongst its supporters Jamie Dornan a useful man to have should it come down to chaining protestors to the railings).

There is also the seeds of a broader campaign being sowed at present, email belfastrevival@gmail.com if you are interested in being kept in the loop. It is hoped that when/if numbers hit a practical level there'll be meetings, discussions and airings of alternative plans.

If this interests you in general then you could touch base with the Ulster Architectural Heritage Society. They've been working tirelessly for years trying to save architectural gems: http://www.uahs.org.uk/


Now, as good as the photos look of the regeneration plans http://www.skyscrapercity.com/showthread.php?t=1762465 it should be pointed out that so did the proposed plans for Glasgow's redevelopment in the 60's