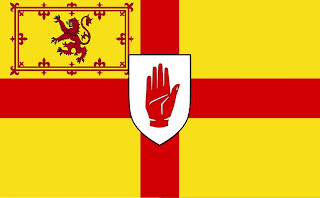 The Punishment
It is the unworthy opinion of your humble narrator that culturally speaking Northern Ireland has been dealt something akin to a punishment set by the Gods of Mount Olympus.

Not satisfied with just plain old pain or misery these Gods of old usually tended to add an ironic twist here or a 'humorous' slant there.
A more famous example is that of Tantalus:

He didn't so much 'bite the hand that feeds' as 'bit it, chopped it up, cooked it and served it as dinner to the people (well, Gods) who took him in'.
They punished him by placing him in the middle of a river underneath a fruit tree.

Not so bad I hear you cry.

Whilst this might sound better than a spell in Maghaberry, it should be noted that Tantalus was condemned to this for eternity. And to make matters worse, whenever he reached to grab the fruit or drink the water, both prizes would recede away from him leaving him hungry and thirsty despite being surrounded by an abundance of food and water.

Now, leaving the confines of Tartarus and returning to the other place the Gods have sent their worst (Northern Ireland) we come to the matter at hand.

Scotland, has an equally rich culture, one which has in many parts been spawned by it's early roots in Ireland, not to mention its very name; 'Scot' is an old Latin word for 'Gael': Music, folk dancing, Gaelic sports, Gaelic language, Whisky.


Granted, each has its own variations and each has dealt with the arrival of English in a different way.
The Irish took it to the heart of their poetic bosom and the Scottish fashioned it to their taste to such an extent that it is regarded in some circles as another language as is its regional variations e.g. Lallans, Doric to name a couple.

In Scotland, the great Highland-Lowland divide served as a cultural fault-line between the Gaelic lands and the 'Scots' but by and large it has reconciled itself to a mixture of the two, for example just go to a wedding in the ever so Anglo Edinburgh to see the widespread use of Highland culture and influences (thanks in part to Sir Walter Scott and a couple of Polish chaps).

To Gael or Not to Gael?
In Northern Ireland however, there is no such reconciliation.

The regrettable reality is that somehow, somewhere along the line, Gaelic culture was seemingly surrendered by the residents chiefly of Scottish descent.

The mere mention of the word 'Gaelic' conjures images of woodkerns, insurgents and barbarous types waiting in the wings to rid 'the planter' from the land (a la 1641).

Given this horror-reflex, it is perhaps not surprising that the Gaelic history of Northern Ireland's Protestants has been exiled to lurk some dark room like an unwanted handicapped Edwardian Royal mule child.

Few are aware for example, that it is supposed (by folks in the know, 'the Ultach') that over half of the (first batch, early 17th century) planters from Scotland were Gaelic speakers.

It was noted how in some cases English speakers actively learned Gaelic to make life easier for themselves.

Indeed, in county Antrim, there would have been many (relatively speaking) who would understand the Scottish Gaels perfectly, as that was a MacDonald stronghold, themselves of Scottish Gaelic origin.

Although this Scottish aspect is forgotten when 1641 is mentioned as the MacDonalds quickly joined in the slaughter against the Protestant new-comers (telling Protestant school kids that Scots killed Scots in Ireland is a bit confusing and quite frankly detracts from the point that it's the f*nians that ye have to mind...)

Imagine if you will, a conversation some where exotic between an Ulster-Scot ex-pat and a Scot from the Western Isles of Scotland.

Lets say The Ulster Scot is a Free Presbyterian called McDonald and is from Co Antrim.

Lets say that the Hebridean is a Free Presbyterian called MacDonald:

Ulster Scot: "Hello there! I over heard you talking, you sound like you're from my part of the world, My name is Mcdonald,"
Hebridean Scot: "well Ciamar a tha sibh? My name is MacDonald too!"

US (sourly): "Sorry, I'm afraid I don't understand Gaelic, where I come from it's regarded as a catholic thing, if you'll excuse me, I'm on my way to find my new church near here..."
HS (shocked): "Oh, sorry. I'm on my way to church too, the free Presbyterian church, are you new here? It IS a Gaelic church after all"

Your narrator considers this discarding of Gaelic culture to be highly insulting to our neighbours in the east and North.
In the Islands Free-Presbyterianism and Presbyterianism are the main religions of Gaelic speakers there.

Bearing in mind the significance that your every day Ulster Scot places on the Kingdom of Dalriada, it seems strange to alienate the language of that kingdom.


Add to that pot the Protestant Gaeltacts in early Belfast (including the Shankill), the numerous examples of Protestant Gaelic academics and wot-not and you have quite a considerable portfolio of evidence to debunk any myth about Gaelic being the sole refuge of 'themuns'.

"A new culture for every one?! Awey an boil yer heid!"
Evidence, it would appear, is schmevidence as far as the new cultural dimension of Northern Ireland is concerned.

Over the past few years there has been as welcomed growth in the 'Ulster Scots' aspect of Northern Irish culture.


Your unworthy narrator was most pleased to see this arrive on the scene as it finally allowed Protestants to listen to fiddles, folk music and celidh bands without the kind of guilt usually reserved for teenagers and their new found 'dirty' habits.

He thought in his foolishness that perhaps the great cultural cross-pollination would begin and that the North would at last 'march' (not the best choice of word possibly) to a vibrant tune of Scottish-Irish re-integration.

A great musical and cultural 'home coming' if you will.

Where instead of simply Irish dancing AND Scottish dancing there could be a mix of both, one that would take the best bits of the two and splice them together.
Or even where each club or dance school would take the best bits that appealed simply to them and give each part of the land it's own little variations (as was the case with fiddling, it differed from county to county).

(On that note, one must hasten to add that there is such an old dance as championed by Willie Drennan, but it has yet to be embraced by the communities in a big way) 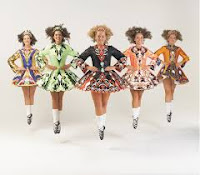 Where instead of the traditional folk sessions that we know of throughout the land, there could be ones adorned with more Scottish aspects (as was the case back in 'the day').

(This happened once before, reels are a Scottish gift to Irish folk music (read 'Handed Down: Country fiddling and dancing in Central and East Down, it'll blow your mind! http://www.amazon.co.uk/Handed-Down-Country-Fiddling-Dancing/dp/1908448512)).

Where pipers, Gaels, lambegs and bodhrans could join in force to make a racket that would shake the mountains and blow the minds of tourists.

Alas, the 'home coming' has turned into a bout of cherry picking.

Your lowly narrator could understand such a path IF the Ulster-Scots champions played the Lowland Scots card.
I would hold my tongue and bite my lip knowing that they were (sort of) correct.

BUT the precedent of Gaelic acceptance has been made: Bagpipes (more RSPBA members in Norn Iron than in Scotland), kilts (or whatever watered down version they have now) and even HIGHLAND dancing (there's a Highland dancing school in Magherafelt, a place where it's not unheard of to regard Irish as a 'foreign' language).

So, while it would appear that some parts of Scottish culture are appealing, coincidentally and strangely enough these very parts are the ones that don't overlap with any cultural aspects of 'the natives' hence the Ulster Scots don't rush to learn Gaelic nor play Shinty.
But anything that is a demarcation from 'themuns' is deemed worthy.

A club for millions around the world (except you know who)
So, given the purge of Scottish culture by the Scots in the original 'Scot-land' one must ask 'how open is this club'?

Many people in Northern Ireland of a nationalist background have Scottish roots.

Many more aren't even aware of it given that their ancestors went 'native' very comfortably, e.g. the O'Sweeneys owe their place in Ireland to an older wave of Scottish migration to Ulster, the Gallowglass, Highland & Island mercenaries from Scotland.


So, were do these most Scottish of the Ulster Scots fit in?
Why can't they join in (even if they wanted to)?

Most of the Catholic towns in North and East Antrim can actually see Scotland on a clear day and can tune into Radio Alba should it tickle their fancy.

The same can't be said for the Ulster-Scots of Mid-Ulster, who are seemingly so distraught at the thought of being 'Irish' that they'll clasp at anything that promises cultural deliverance.

Again, like so many things in NI does it boil down to which church you had your head wetted in when you were a baby?

Why can a Protestant O'Neill or McLean be considered an Ulster-Scot but not a Catholic McDonnell or McLean?

Flegs (again)
Given that the cultural aspect of Ulster-Scots is to celebrate the Scottish aspect of their Ulster (read 'Irish') background, then why do political symbols feature so prominently?
There were no Ulster flags back in the time of the plantations. There wasn't even a United Kingdom (as such, don't split hairs).
Yet go to any Ulster-Scots event and you're very likely to see the redundant Ulster flag (out of use since '73) or a Union Flag.

Now, your narrator does so love a good Union Flag. But there is a time and a place.
Such places do not include the waistline of a 'flegtard' protester or a cultural event that should in theory encapsulate the TWO main communities in Northern Ireland.
Especially as one of those communities has a bit of a chequered history with the Union Flag (but which one? aha!).

So why bother using it?

Will the music sound worse?

Will a point be lost?

Does the flying of a Union flag not fly in the face of the support for the Ulster-American rebels during the War of Independence?


Apply a bit of common sense to the project and bring in the Scottish Gaelic element from the cold and then the market expands dramatically, potentially taking in Donegal, Monaghan and Cavan.

With this expansion potentially comes a natural cross-pollination of culture which stands to be greater than the sum of it's parts: The parts being very fine in their own right too, the cultures of Scotland and the cultures of Ireland.

Quois? Sto? Was? Cad é? Что? Apa? Kio?
So, the big question, bearing in mind that your low-born narrator is more than aware of the Northern Irish anomalies like Protestant GAA players, Asian and Arab Loyalists, Protestant Republicans et al, he is nonetheless very aware that they are known for being what they are, the exceptions rather than the rule, certainly not THE NORM, presumably like any Catholic Ulster Scots that may be in (agency approved) existence:

So,Time to be honest, is it actually for Ulster-Scots or just Ulster-Protestants?

Afterthought: Perhaps, introducing the Gaelic element to the Ulster-Scots culture amount to signing it's own death warrant?
Perhaps they believe that Gaelic is now so unpalatable to the Protestant community that it is a paradox worth having?
Your wretched narrator grieves at this thought.