"With Faith in God for King and Fatherland" - Serbian Chetnik Motto

I don't have a vendetta against Jamie Bryson or anything like that, but his bull-headed insistence on destroying Unionism by taking it through the Carsonian graveyard and digging up the bones of old dead Unionism to assemble a Unionist Frankenstein is quite frankly alarming me.

And he's done it again.

Well, rather I did first.

I added his blog to my list and now the temptation to read it is just too much.

His most recent contribution is by and large 'fine'.
http://jamiebryson.blogspot.com.au/2013/10/elections-2014-right-of-independent.html

He's talking about the rights of independent Loyalists to put themselves forward to represent people.

Nothing wrong with that.

I do fear that it'll force the DUP further to the right, but, that remains to be seen so knock yourselves out.

The bit that did stick with me is this:

"The political views carried by those such as myself have recently been described as 'extreme' by those that wish to mould loyalism into a cuddly, re packaged brand that is more friendly and welcoming to those that are offended by every aspect of our cultural and religious identity..."

What fresh hell is this?

All the criticism leveled at Jamie might have been too in depth for him to absorb and I'm sure he's a busy chap, so, I'll keep this brief.

I detect the Loyalist filter again.

I highlighted before that (in theory) a Protestant can be a Republican.

Though once common enough it is now very rare but still, it is possible.

This is in stark contrast to Jamie's Loyalism which would not do anything to remove Loyalism's obstacles to Catholics: The Lanark Way bonfire, bands with paramilitary regalia, songs about killing Catholics etc.

Even if they did remove them it's highly unlikely legions of Catholics would come knocking at the doors of Orange Halls to join bands.

BUT, what harm would it do to level the playing field a bit?

How can removing these elements result in a 'cuddly' creature that would destroy Unionism?

Also, who are these people who are offended by EVERY aspect of Loyalist (or Unionist or Protestant culture)?

From what I see most of the direct calls come from moderate Unionists NOT seasoned Republicans, they seemingly only stick their oar in  whenever there is potential political capital.
Indeed, why kill the goose that lays the golden eggs?
If Loyalism's underbelly and sometimes vulgar displays make Unionism a cold house for Catholics then that makes life easier for those who would see Northern Ireland cease to exist.

But what of the majority who just have SOME irks with Loyalism that could easily be addressed?

Or does binary Loyalism not allow for the recognition of such middle ground?


Methinks he's just hearing what he wants to hear.

The complaints are clear, they allude to a small part of Loyalist culture, not its keystone:

a/ Excessive drinking at some parades

b/ Songs about the murders or deaths of Catholics

d/ Paramilitary trappings
(Of course there are more such as attacking police with masonry and swords, but baby steps as they say...)

All could be clamped down upon with a bit of effort.

The Loyalist band scene is more disciplined than what people give it credit for.

But There is a lack of will.

'Leaders' like Jamie are loath to encourage such will as they either see nothing wrong with this behaviour (which would beg the question how much of the Holy Bible has he actually read?) or they're digging their heels in as they resent being told what to do.

If that's the case then allow me to be the first to apologise.

I'm sorry you think that you have no option but to dig your heels in under the pressure.

I'm sorry if you think I'm talking down my nose at you from some aloof position that exists only in my arrogant mind.

I'm sorry if I/we give the impression that we don't care for working class Loyalists.

That's simply not true, but it's very hard to convince them of that.

Some of us see things differently and are denounced as Lundies for our different views (you'd think a Martin Luther inspired religion could appreciate speaking out against drunkenness and ungodly behaviour?) so we have to apply pressure in order to be heard.

The pressure isn't there to see the end of band culture.
On the contrary, if any one is presenting the case for banning parades altogether it is the Orange Order and your mates like Wille Frazer and the camp at Twaddell.

I'm/we're not asking you to change these things out of spite or for the sake of Getalongerism.

I'm/We're asking you to help change these things because they are, when judged on their own, fundamentally wrong.
Comparing them to the Provo's murder campaign might make them seem 'good' but that's a pretty low bar to compare one's behaviour to.

I'm also asking you to do it because it's killing Unionism.

Our support in Britain shrinks evermore.

People are embarrassed by 'our' actions.

You aren't a fan of Sinn Fein.


Yet you seem oblivious to the fact that every time Loyalists kick off it detracts from whatever 'Republicans' might be up to.
The SpAd Bill was a red face for Sinn Fein and it happened only a few months ago, but since marching season kicked off it's now ancient history and SF have recovered from it.

Loyalism, in theory, should be the bulwark against Republicanism.

But the way you and other Loyalists are so predictably reactive and easy to manipulate means that time and time again Republican blunders are forgotten about and that Loyalists can be counted on to flair up when desired e.g. Richard Haass is on his way to town so Republicans organise a few parades and people like yourself go ape and then Mr Haass gets to see who the 'bad guys' are.


If you despise the 'cuddly' idea of Loyalism, then do the Orangemen at Rossnowlagh disgust you?

Do peaceful parades with no paramilitary trappings offend you?

Does the idea of a Catholic voting for the Union and going to a Northern Ireland football game make you shiver in dread?

If not, then what's your reason for not supporting some changes and a giving Loyalism a new lease of life?

What of this Bible based morality that you wish to entwine with Loyalism? Surely drunken behaviour, murderous songs and disrespecting the law are incompatible with Christian teachings?

Or do you intend to overlook those aspects?

You're drawing a line in the sand that many can't cross and before you defiantly beat your chest and say that you don't need them, that a smaller group of determined people is better without dead-weight then please click on these links below:

You'll see what happened to a group of red, white and blue fleg loving non (anti?)-Catholics when they went against the wishes of their 'mainland' and what happened them at the hands of their numerically stronger Catholic neighbours (whom they pissed off at every opportunity despite pleads for co-operation) and how they preferred to stay within their 'Union' (Yugoslavia) even though the Union was clearly disintegrating: 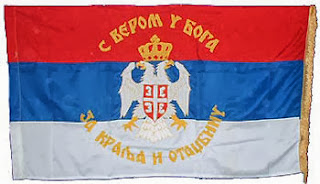 
Could lessons be learned?


These guys love to celebrate battles from hundreds of years ago too...


They also have difficulty admitting that they don't control 'hallowed ground' anymore...

It should be, for Jamie's rhetoric and visions are frighteningly similar to those of the  Republic of the Serbian Krajina ("Krai-eena").

And like the Republic of the Serbian Krajina he's on the overtly nationalistic, flag-covered, defiant, truth-denying, partisan road to destruction. And he (with others) will potentially take Northern Ireland with him.