Foreigners, Lundys and the Irish Language


Once again Jamie Bryson has single-handedly made me reach for my wee laptop and vent my digital spleen.

Although, it won't be a lecture, rather I'm just going to present a few nuggets of history that highlight the Protestant history with Gaelic (I say Gaelic over Irish as the topic leaps from Ireland to Scotland so Gaelic is an umbrella term in this instance).

NOTE: A lot of the leg work here is borrowed from a few friends of mine who are putting together a book that will have them all hung from Samson and Goliath for their defiance of 'the norm';
Their book will highlight the lesser-popular facts of Northern Irish history at the expense of unionists, republicans, nationalists, Royalists, the army, the Catholic church, the Orange Order, the Vatican, the Apprentice Boys and everyone else.
Watch this space folks...

Anybody who wants the full monty of the Irish-Protestant Gaelic relationship could do worse than to read these two eye-opening gems:

(though, help a local business out and order it from No Alibis in Belfast, http://www.noalibis.com/ )


Anyway, it's not a lecture, just a presentation of historical snippets. Make up your own mind.

First of all though, why would Jamie regard it as a 'foreign language'?

Well it's not the first time I've heard this dismissal from unionists; local purveyor of fire & brimstone and gospel music star, Rev William McCrea fobbed the language off in similar terms in a Magherafelt council meeting.

(NOTE: McCrea - derives from an ancient Gaelic male given name "MacRaith", son of grace, prosperity, or favour, from the Celtic "rat", luck, fortune. This name, inscribed as "Maqi Rati" on an ogham stone found at Keenrath, in the Irish county of Cork, may have been introduced into Scotland as early as the 5th Century A.D., when the Gaelic language was brought from Ireland.)

Also, his DUP colleague Edwin Poots told Sluggerotoole's David McCann that his greatest achievement was 'burying the Irish language act' as he believes that there is precious little need for it outside of republican circles.

So, how do men, some of Gaelic descent, come to regard an ancient language of this land as 'foreign'?

Well, invariably it comes from hostility to the language.

This might sound strange coming from someone who would dearly love to see a Gaelic revival across Ireland, Scotland and the Isle of Man, but, it's true.

Before that, the only time I ever saw anything in Irish/Gaelic was if I came across a Sinn Fein leaflet, IRA propaganda or something republican.

In short, SF & the IRA's use of Irish made it repellent to me.

I assumed that they'd never existed.

In that respect, I suppose it was kind of 'foreign' as in it had NOTHING to do with me and my 'folk'.

Scotland changed all that.

And before you reach for the old dead end arguments of "well, republicans use shoes, so are you against them too?" please consider the following before you make an eejit of yourself and voice such an argument;

Until (relatively) recently, both Rangers and Celtic had the same sponsors.

For decades before hand they did not.

Because those clever mind doctors and marketers realised that negative association was very powerful, more people were put off the services of CR Smith and McEwans lager than were attracted to them.

In effect, they discovered the part of the brain that brands something as 'themuns'.

So, now a sponsor must sponsor both teams rather than risk a boycott from the team's rivals. (Though Celtic went solo again, if it was a good move for Magners remains to be seen)

Anyhoo, it demonstrates the power of negative association and the republican 'hijacking' of Gaelic really should not be discounted.
At all.
In fact a song and dance should be made about it.

Anyway, since I've managed to remove the republican contamination from my impression of the Gaelic languages and started to (slovenly) study Scottish Gaelic I've stumbled across some eyebrow-raisers.

Without further ado, some things to ponder:


* Edward Carson, co-founder of the UVF, father of Northern Ireland and uber-Brit was a speaker of Irish

* There is a tale of soldiers of the Ulster 36th marching past men from a Munster regiment and besting the Munster men in 'slagging session' in Gaelic.

* The 1911 census showed that nearly a fifth of the Shankill's Protestant population spoke Gaelic (as many as the Falls area)
http://www.belfasttelegraph.co.uk/news/local-national/northern-ireland/census-1911-belfasts-shankill-had-as-many-irish-speakers-as-falls-28733198.html

* Contrary to popular belief, the gentry and landlord class were not fervently opposed to the language. On the contrary, when it finally dawned on them that their English counterparts saw them as 'Irish' many of them embraced this heritage and commissioned Irish books, murals and mosaics

* Fitzroy Presbyterian church in Belfast counts a number of Irish speakers among its congregation and has weekly services in Irish
http://www.fitzroy.org.uk/Groups/80951/Fitzroy_Presbyterian_Church/Get_Connected/Irish_Speakers/Irish_Speakers.aspx 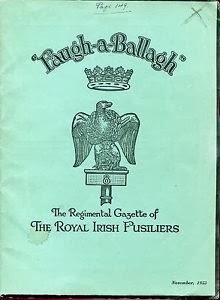 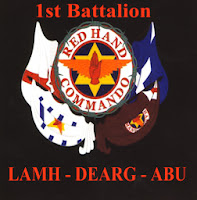 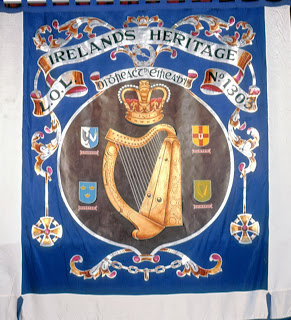 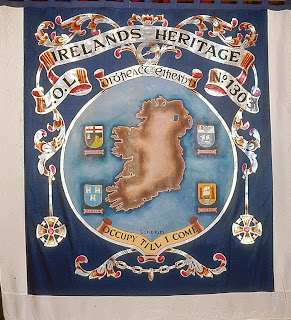 * It is thought that some (if not ALL) of the original 13 Apprentice Boys of Derry's famous siege spoke Gaelic. (Given the make up of the population back then it is highly unlikely that none of them had any understanding of Gaelic)


* The Gaelic League (ironically partly responsible for severing the Protestant involvement in Gaelic) in its early days attracted the head of the Independent Orange Order and a grand master of a Belfast Orange lodge. 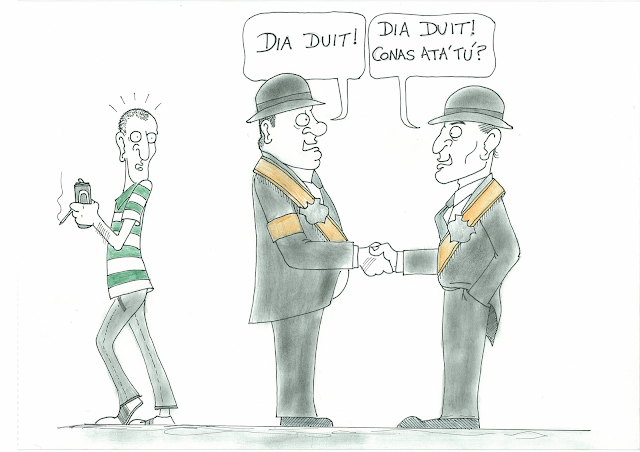 So there you have it, a mere drop in the ocean of the Irish Protestant relationship with Gaelic.

It is unfortunate that it is now a political football and that unionists are so terrified of the language eating them up.

I would argue that they would have some control of it's direction and growth (e.g. increase the Scottish element of the Northern dialects?) if they got involved rather than backing off into the corner trying to hide from its inevitable growth.

I don't see how NOT getting involved achieves anything:

"Cool, so you're going to join and have a say in its affairs then?"

"No. We'll stand outside with a sign saying 'down with this sort of thing'...."

"How's that working for you so far?

Hardly the stuff of dynamic thinking. As usual.


Could some one, anyone please explain to me how Gaelic is a foreign language to Northern Ireland?

Especially when we take into consideration the Gaelic names of some of the unionist representatives:

I just went through a list of unionist councilors and MLA's and found so many that I got bored, I'd be here all night writing them down...

Last and by no means least, there is another  unionist voice potentially of Gaelic origin:

This interesting surname has two possible origins.
The first is a patronymic from the male given name "Brice", i.e. "son of Brice".
Brice is a pet form of the Welsh name "Rhys", meaning rashness; an ancient namebearer being King Rhyence of North Wales, whose hobby of collecting the beards of his rivals to trim his cloak proved his undoing when he attempted to complete his collection with King Arthur's.
The name may also be an Anglicized form of the Gaelic "O Briosain", an altered version of "O'Muirgheasain" (Morrissey), meaning "son of Muirgheasain".
In Ireland it originated in Ulster, particularly in Counties Donegal and Derry. The 17th Century Hearth Money Rolls for the Northern counties list many people with the name Mrieson and similar variants, later these became known as Morrison, Bryson is the modern form, and is commonly found recorded in the counties mentioned above.